What are you looking for?

Free Shipping to Mexico, U.S.A & Europe on all orders!

The Wixárika nation have been resisting for several centuries the imposition of projects that harm the environment and their land. They have been stuck in an ongoing battle with foreign companies and the Mexican Government as they fight the installation of  transnational mines in Wirikuta and other sacred sites.

They have had several victories, but these past couple of years things have turned for the worst; even though the state of San Luis Potosi declared these lands a Sacred Natural Area in 2001, the lawless impunity by which the federal government abide by have kept handing out private concessions to American and Canadian companies.

“There is a feeling that we are being attacked because of our beliefs. Higher powers want to destroy the peyote and the ancestral wisdom stored in it, protected for centuries by the Wixarikas” was said to us by Don Andrés,  a high level Maraka’ame and Wixaria leader. 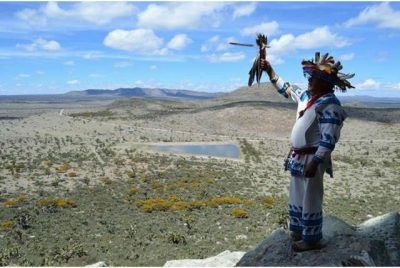 Even with a simple view from google earth you can really see the extent at which the land has been exploited and destroyed. For a culture who have lived there for more than 600 years this is the equivalent of a typical foreign and domestic invasion.

Talking to another dear friend of ours “Boshe Mireles” he spoke to us out of complete transparency, and what he told us is worrisome. He said “This is a sinking ship, and unless someone helps us outside the Wixarika culture we have no hope. This government is a plague to the spirit of Mexico and the cause of so much division and mistrust among everyone. We have a tradition to uphold that has been here for centuries, older than the revolution and the independence. We are being attacked; this is a cry for help for the Mexican people, our brothers to help us.” No words to describe the pain these words brings us. 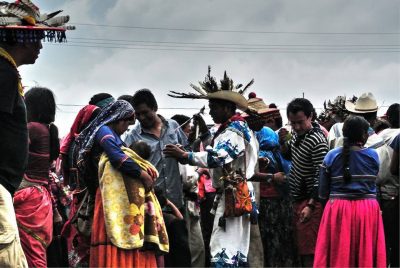 That is why Muan is committed to donating 10% of all sales which will go directly to the development and expansion of Wixarika culture. Donated to Don Andrés so more people can be aware, and he can help spread the message. We will also soon reveal a new clothing line that is completely dedicated to Wixarika craftsmanship by Wirra craftsmen, so they can benefit monetarily from the work they do and expose their message at the same time.

Buy and help our Wixarika brothers! Pamparios (Thank you) ♥